ID:1874 Hotels and B&B near Minori on The Amalficoast - Minori (Salerno) 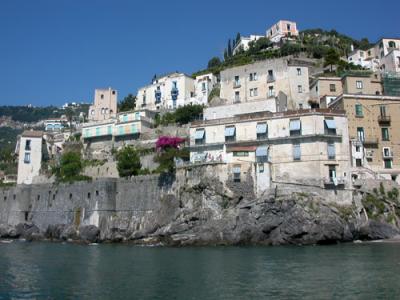 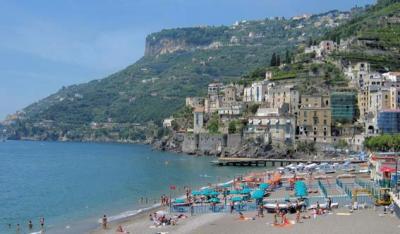 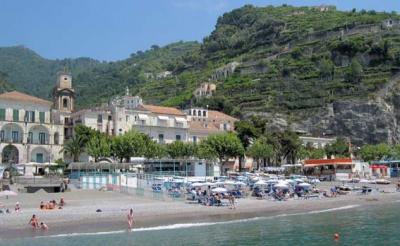 - Hotels on the Beaches, Coast of Amalfi 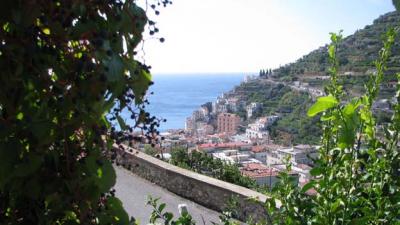 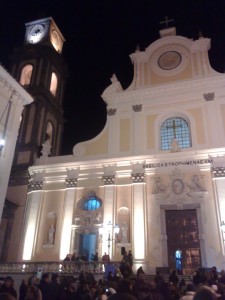 - Visit the Cathedral of Saint Trofimena 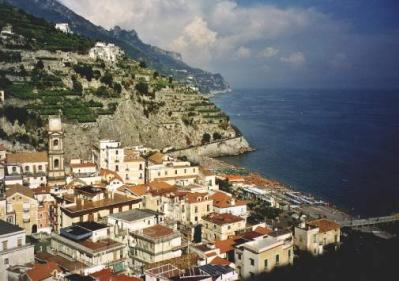 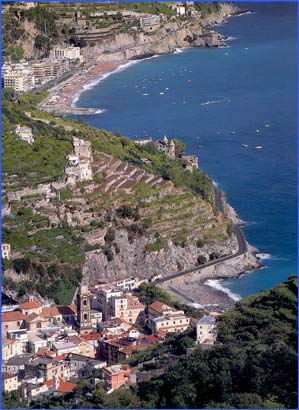 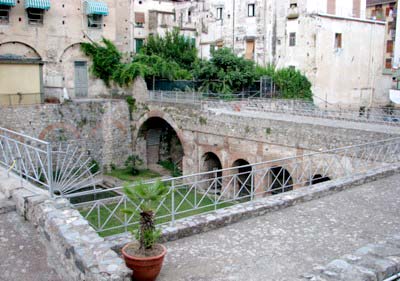 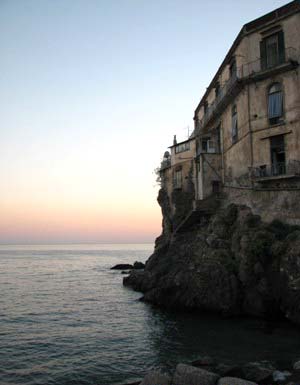 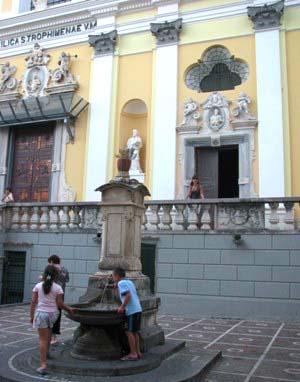 - Inexpensive B&B in the Center of Minori 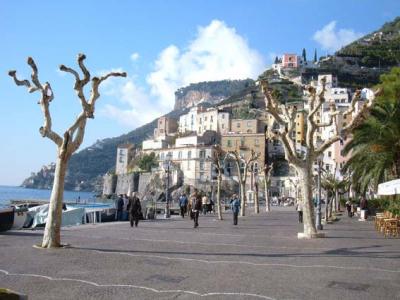 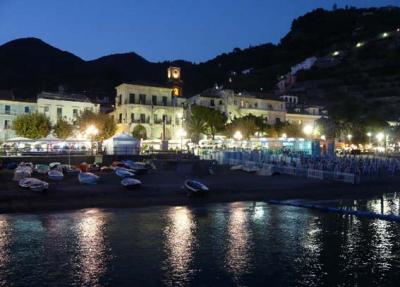 - Seaside Holiday in the Region of Campania 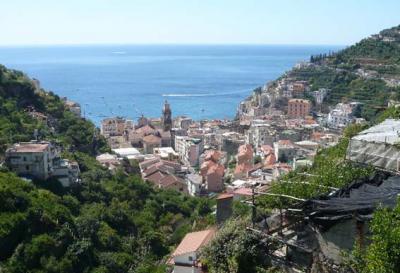 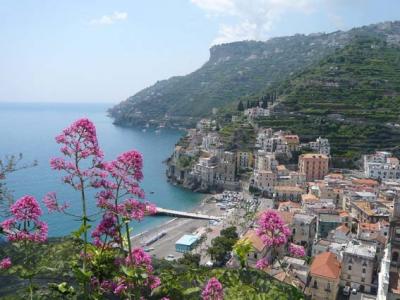 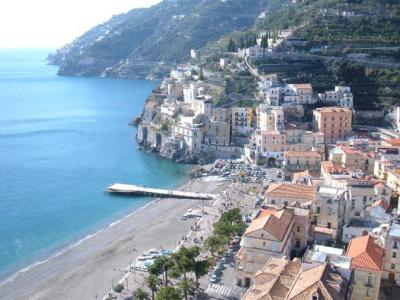 - Last Minute Trip to Italy, Where to stay 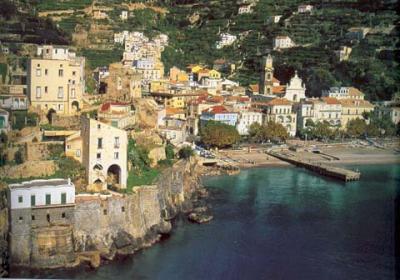 - Last Minute Offers in Hotels near the Sea 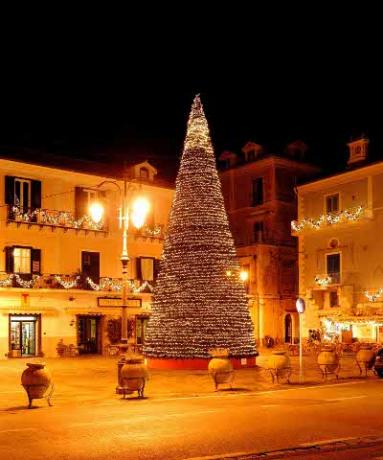 - Christmas Holiday in Italy, Where to stay 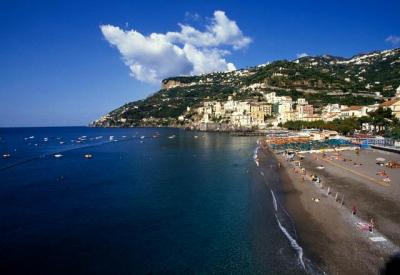 - Stay in Hotel near the Beaches of Minori 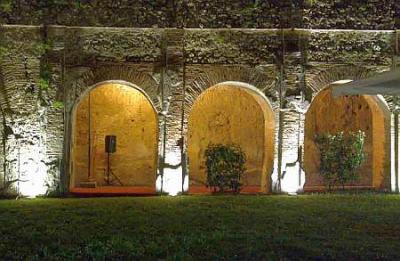 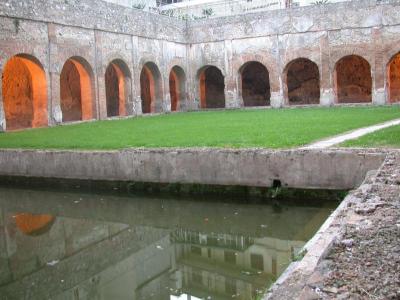 Do you want to come on holiday to Minori on the Coast of Amalfi?

With our service "Get The Best Offer" with a single click you can contact dozens of tourist facilities hotel, B & Bs, spas, Hostels, wellness-centers, residences near Minori.

So if you are looking for a hotel to stay in the area of the Minori in the province of Salerno in the region of Campania, for a summer vacation or a last minute trip or a wellness-holiday in one of the most beautiful and fascinating locations and in Italy...

Minori is the only town on the picturesque Amalfi coast with authentic sandy beaches. For this reason, the town has invested heavily in tourism, and the old town has ended up obscured by a massive beach promenade.
Once you get here you will notice it is much more than a small and pleasant Amalfi Coast sea-town but also the perfect place to really feel some of the southitalian joy and tipical the mediterranian atmosphere.

Like other major towns of the Amalfi Coast Minori was founded by ancient roman aristocrats who chose the place for its beauty and mild climate, and built their luxurious villas here.

Minori soon started to produce paper, liquors and other lemon specialties, since lemons are a typical product of this area. This production is still a main activity of the town and is carried on with strict respect of the genuine local tradition.

The name Minori derives from the ancient latin name "Rheginna Minor" that came from the river Rheginna, which still runs through the valley of Minori.
If you come to Minori make sure you visit the ancient roman villa and the Basilica of Santa Trofimena, and the churchs of Santa Lucia, San Gennaro and San Michele as well, good examples of southern italian architecture.

The lemon liqueur, ’limoncello’ originates here. It’s made from lemon rind, mixed with alcohol, sugar and secret ingredients, which give it its refreshing, bittersweet taste. Many devotees enjoy a glass after a meal or served as an aperitif. Minori is also home to one of Italy’s most famous patisseries - De Riso, which is on the main square and has a wonderful selection of cakes and semi-cold ice-cream desserts known as ’semifreddi’. Many have tried to emulate their recipes, but you won’t get them as good as this anywhere else.

Only a brief stretch of coastline divides Amalfi and Minori (the ancient 'Regina Minor'); however, even this small town played its part along with the others in the history of the Maritime Republic of Amalfi.

Its origins lie with the picentines. Certainly the Romans must have come across this quiet part of coast, leaving us the remains of a first century roman villa., rediscovered at the beginning of the twentieth century.

Do you want to come on holiday to Minori on the Coats of Amalfi?

With our service "Get The Best Offer" with a single click you can contact dozens of tourist facilities hotel, B & Bs, spas, Hostels, wellness-centers, residences near Minori.

So if you are looking for a hotel to stay in Minori on the Amalfi Coast in the province of Foggia, for a summer vacation or a last minute trip or a wellness-holiday in one of the most beautiful and fascinating locations and in Italy...

As well as being an episcopal residence until the nineteenth century, Minori was also an important centre for the production of "paper" and "pasta".

To visit :The present church of Santa Trofimena, built during the eighteenth century in baroque style, replaced an older building. It has three aisles, with paintings by various authors decorating the walls. Meanwhile in the apse above the high altar a large panel showing the "Crucifixion" painted by Marco Pino da Siena can be seen. The remains of Santa Trofimena are kept in the church's crypt.

The Roman Villa, just in the centre of Minori. The remains of a first century roman villa where found here, it is possible to see the thermal baths, nimphaneum, the peristilio and viridarium.

Minori is not only a wonderful holiday resort full of piece and quite but in the same time filled with life and joy, it is also the perfect startingponit for a lot of fabulous destinations like...

Pompei! If you´ve never been there it is A MUST!

A historical town that dates back to the 7th or 8th century BC when the Greeks founded a settlement at the mouth of the River Sarno. Then the town was for a short while under the control of the Etruscans until the Samnites conquered the area in the 5th century BC. Their rule lasted for over 300 years, until the Romans came. Pompeii eventually became a Roman colony and Roman culture came to have a great influence on all aspects of the character of the town.

For over 150 years the town flourished and grew into a prominent Roman town with baths, several theatres, many shops, brothels and a large population. All this came to a sudden end when the volcano Vesuvius erupted on 2nd August 79. The lava never actually reached the town, but for nearly three whole days, Pompeii was buried beneath pumice stone and ash. Many managed to escape, but it is estimated that a couple of thousand people died.
Pompeii lay buried for centuries, but in the middle of the 18th century, the town was rediscovered and excavation began, which is still going on today. The whole town has been lying in a Sleeping Beauty-esque sleep, which makes this amongst the most extensive, and impressive Roman ruins ever found. Particularly fascinating are the hollows, which occurred as the ash covered the corpses. In the19th century, someone had the great idea of using these hollows as moulds from which they prepared a selection of statues of people in their death throes. These are both terrifying and fascinating at the same time! Most of them have been moved to Naples, but there are a dozen or so left in Pompeii.

Or Sorrento, Famous for its art, poetry, literature, music, dance (tarantella) and first class cuisine (pizza and pasta) Sorrento is one of the most recognized coastal destinations in the world, and the town offers excellent relaxation and calm surroundings.

The town is also called la gentile (the friendly town) because of its mild climate, its relaxing and beautiful gardens and because of the friendliness and hospitality of the local people. Since the Middle Ages, the town has been a holiday destination for royal and aristocratic families.

The Italian writer Torquato Tasso was born in the town, and today the town’s main square is named after him. Corso Italia starts at the main square; it is a street with an abundance of shops, delightful cafés and good restaurants. We recommend a visit to the cathedral, the Verniero palace with its Arabic adornments and Sedile Deminova, which dates back to the end of the 15th century. This was where the aristocracy met as representatives for the various parts of town.

Or Naples,  This city, which is also referred to as the capital of Southern Italy, contains sights for everyone, and is particularly fascinating because of its lively, and at times, chaotic street life, which gives the city a really special atmosphere.
If you are interested in art or history, there are countless opportunities to go exploring in Naples’ many museums. If you are interested in theatre or music, the town is a veritable oasis, and for foodies there are taste sensations just waiting to be sampled!
Town life in itself is an experience - both to watch and be watched - so you can just spend time at a pavement café and enjoy watching the scene that unfolds in front of you!

Hotels and B&B near Minori on The Amalficoast - Minori

Home > Request Best Offer > Hotels > Campania > Minori > Hotels and B&B near Minori on The Amalficoast
Suggest to your friends: Tweet