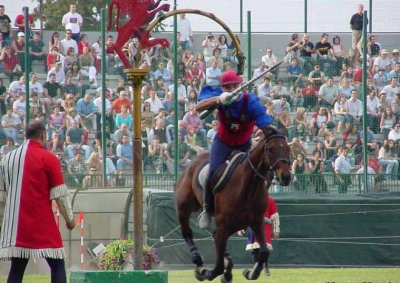 - Corsa all'Anello in Narni, detail of the tournament 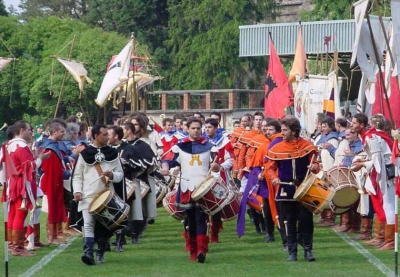 - Flags and drummers during the Corsa all'Anello in Narni 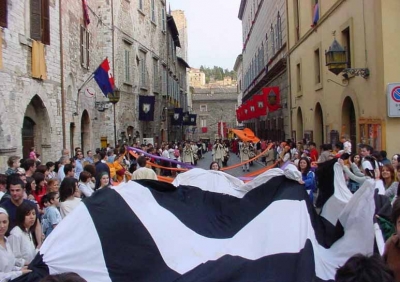 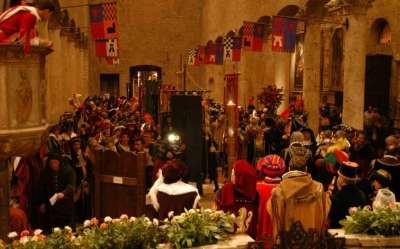 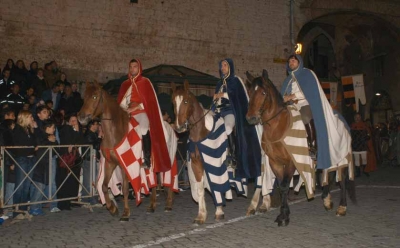 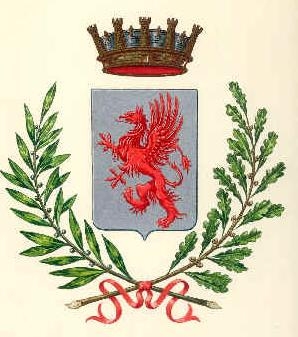 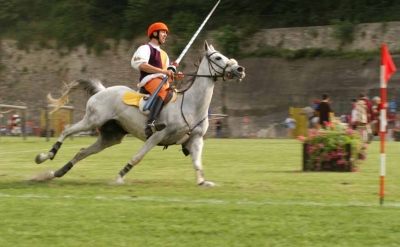 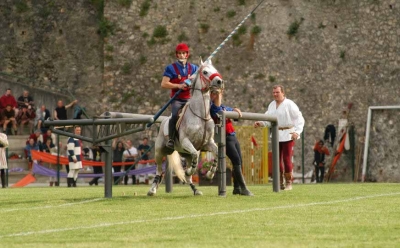 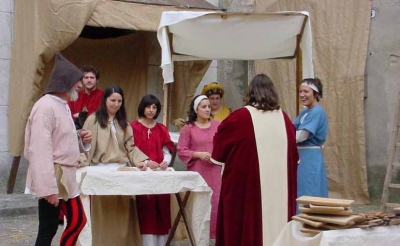 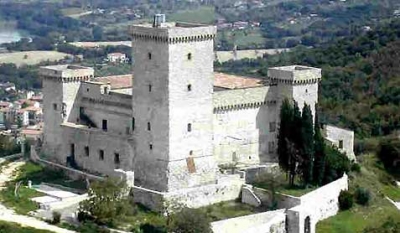 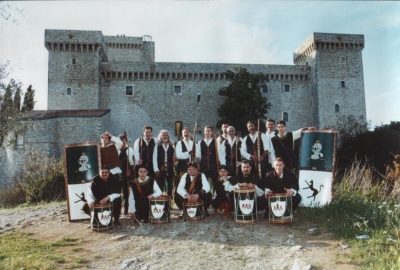 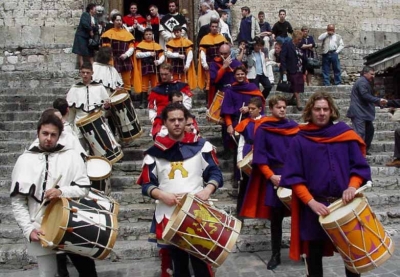 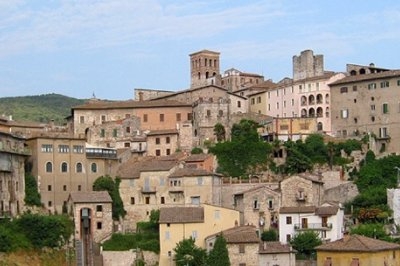 - Panoramic view of Narni in Umbria

Corsa all'Anello in Narni-Umbria
The main feast in medieval Narni was dedicated to the Patron Saint Giovenale, taking place each year on the 3rd of May.
During this festival the whole town of Narni contributes to recreate the atmosphere of 1371, year of the first written city laws.
Flags and torches adorn squares and streets, taverns and pizza ovens emanate into the streets typical fragrances of Umbrian
meals and very good wines.
The whole town hosts medieval sounds and colours. Historical processions, art exhibitions, folk shows, concerts, competitions
among the terzieri all combine to transform the town into a medieval picture.
The town is divided into 3 parts or terzieri, named Mezule, Fraporta and Santa Maria and each has different colours to be
recognized by everyone.

The town crier reads the traditional ban and the taverns are open: this is the beginning of a feast which dates back to the first
half of the 14th century. This festival comes to its highest point on the 3rd of May, when the Saint Patron of Narni - S.Giovenale -
is celebrated by all the people in the town.

Following the rules and regulations prescribed by the medieval town laws, dating back to the year 1371, the riders participate
in the historical “Race to the ring” - wearing their medieval costumes- riding their horses, trying to drive their lances through
a silver ring. The riders come to the main square of the town, the present Piazza dei Priori, which once was called “Platea Maior”.

Among the main events during the festival, we cannot forget the Offer of the Candles in the Cathedral, taking place on the
2nd of May. This evocative display reminds us of the city's authorities offer of candles (brought also by the representatives
of castles and guilds) to the tomb of the Patron Saint Giovenale on the occasion of his feast.
During the two weeks preceding the race, the whole town turns to be the stage for religious and civic plays, and several medieval
shows are organised by each “Terziere” (i.e. the part the town is divided into): from the blessing of the riders to the flag throwers’
shows, ending up with the historical procession on the last Saturday, just before the racing day.

Narni Historical notes
The area around Narni was already inhabited in the Palaeolithic and Neolithic Ages, as attested by finds made in some of the caves.
In historic times, the place was first settled by the Umbrians who called the town Nequinum; following the conquest by the Romans
the name was changed into Narnia, owing this name to the river Nar. In the 9th century Narni flourished economically and culturally,
thanks to the presence of the consular road Via Flaminia connecting Rome to the Adriatic Sea.
The changes were radical: the Platea Major replaced the Roman Forum; large civil and religious buildings were built such as the
Magistrate's Palace, the Palace of Priors and the Cathedral dedicated to Saint Giovenale. In the 14th century Narni became part of
the territories controlled by the papacy and accordingly lost its independence. Under the papacy of Gregory XI, Cardinal Albornoz
had an imposing Fortress built overlooking the town from the hill. The loss of political independence led to economic and cultural decadence.
This is the time of the pillage made by the German soldiers (the so called Lanzknechts) (17th July 1527) and of the following plague. The town was not destroyed but the loss of human lives was anyway heavy.
The following centuries, until the time of the Resurgence, were not marked by any important event, although the ideals of Mazzini and the republican ones had many followers in Narni. This fact strongly influenced the local powers between the late 19th and the early 20th century. During that period the first large industries came to Narni, and economic, as well as cultural and social structures, rapidly changed in consequence of this, leaving deep marks on the landscape too.

Monuments
The Fortress of Albornoz
It lies on a hill at an altitude of 406 m a.s.l. built upon a former monastery devoted to St. Mary Magdalene, between 1360 and 1378, on account of Cardinal Albornoz, who in the same years also had the fortresses of Spoleto, Viterbo, Assisi, Montefiascone and Orvieto built. The Fortress is square shaped, with towers at its corners. The highest tower, the donjon (or Maschio in Italian) can be reached by way of a spiral staircase, from within the courtyard which is also square and has at its centre a cistern in travertine with an octagonal mouth.
The building is surrounded on three sides by a moat, while the walls on the fourth side are supported by a rock jutting out over a precipice. From the outer walls, long walls lead to the west heading to the Via Flaminia, where the Roman City Gate and the Feronia Gate were located and, to the east until the old nunnery of S. Croce. Restoration and fortification works followed each other during the following centuries, bringing additions and modifications. The Fortress has now been completely restored and measures 1596.05 m2. distributed on four levels.

Augustus’ Bridge
It was built around 27 B.C. and it was used as the old passage of the road Via Flaminia. The bridge must have had three or four arches, of which only the first - and possibly the largest one - can be seen today, with the ruins of two other pillars. The brickwork was completely embossed. The bridge was 160 m long, and the remaining arch is 30 m. high. It is an exceptional example of the Roman Golden Age in terms of perfection of craftsmanship and originality of the construction.

Cathedral
It was consecrated in 1145. It has a renaissance portico (1490) and 3 access portals. The interior is divided into 4 naves. In the Cathedral you can admire these works of art: an early fifteenth-century fresco of the Madonna and Baby by an anonymous local master; The Chapel of the Holy Sacrament with an arc of triumph covered in bas-reliefs dated 1490; the Oratory of St. Cassius, an important Christian archaeological monument in which St. Giovenale, bishop and patron saint of the town, was buried in 376 AD, and later his successors; the Chapel of the Blessed Lucia containing paintings by Trevisani dated 1710; The Chapel of St. Joseph, the Confession by the architect Paglia; the altar of St. Biagio and the altar of St. Peter with a painting by Agresti. In the Chapel called "Coretto d'Inverno" (Winter Choir), there is a fifteenth-century painting on board of the Madonna of Consolation.
The central nave has a sequence of lowered arches characteristic of Romanesque architecture in Narni, and at the end of it there are some remains of thirteenth and fifteenth-century frescos. The apse is an original and rare example of Gothic architecture with
French influences (14th century) Palace of the Priors and town Hall The Palace of the Priors, attributed to Gattapone, looks down onto the homonymous square, formerly known as Platea Major, and it was the headquarters of the town magistracy in medieval times. The portal with its small town-crier's loggia and the majestic loggia  with two daring arches supported by a central octagonal ribbed pillar are interesting too see. Opposite the Palace of the Priors stands the Town Hall, headquarters of the highest authorities. The building is the result of the adaptation of 3 towers turned into houses, acquired by the Municipality in 1282.On the upper floor there are six fifteenth-century windows, while on the facade there are sculptures of animals and mutilated statues. The tombstones commemorate the citizens of Narni or famous governors. In the entrance hall there are some archaeological finds from the town and surrounding areas. In the council Hall we can admire the famous Altarpiece by Ghirlandaio depicting the coronation of the Virgin.

Narni Underground
These are the areas underneath the ancient convent of the church of St. Dominic, consisting of an early Roman church,
with thirteenth and fifteenth-century frescos, a Roman cistern and a prison cell used by the tribunal of Inquisition, where  the graffiti the prisoners scratched on the walls can be seen, some of which are still to be deciphered. the underground areas of Santa Maria Impensole consist of an eighth-century church with three naves, built on top of the ruins of a Roman temple, turned into a crypt in the XII century, it now still has two Roman cisterns, one of which still well preserved. The Roman aqueduct of the Formina can be accessed from the tunnels of St. Biagio, San Silvestro and Mount Ippolito.