- Knight during the tournament 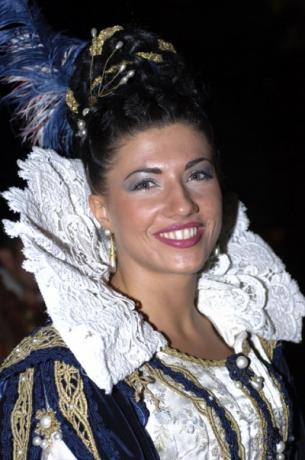 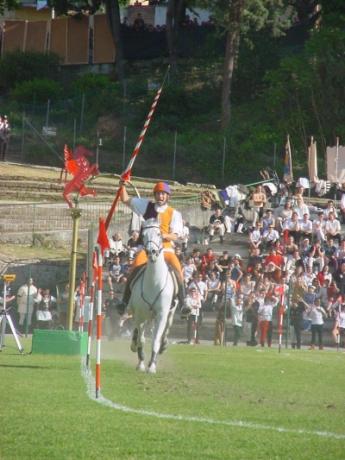 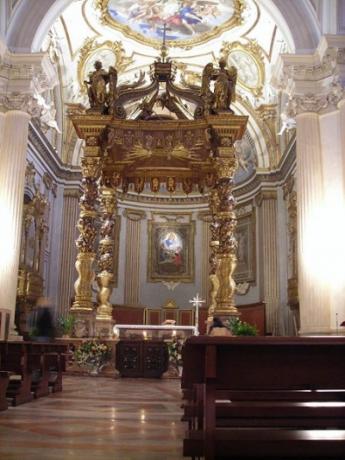 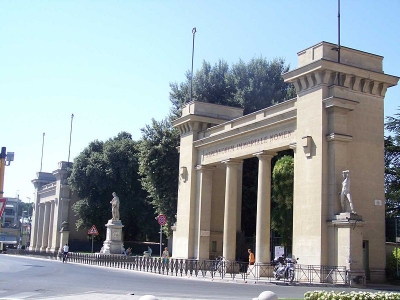 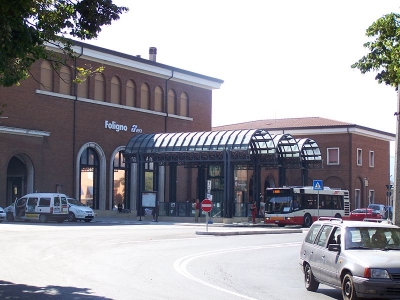 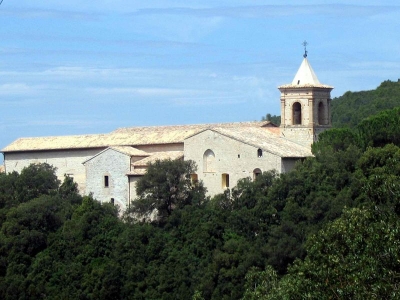 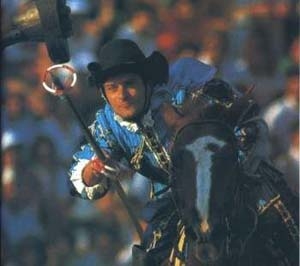 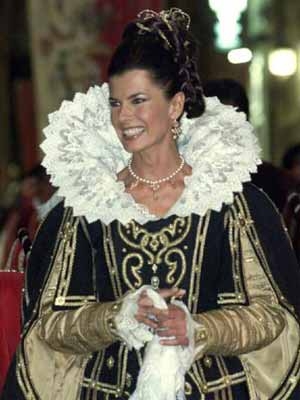 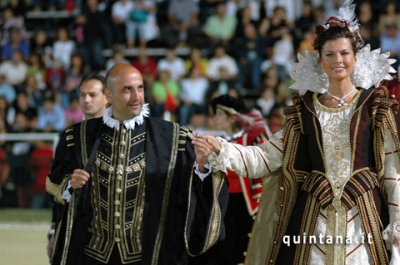 - Quintana show through the medieval Foligno 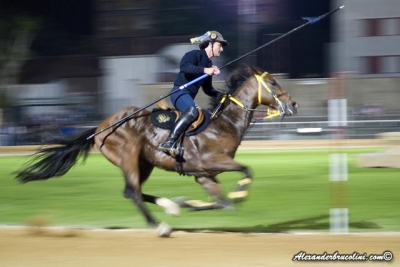 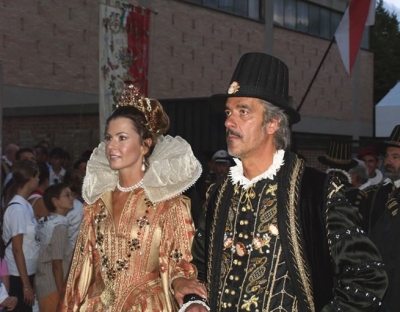 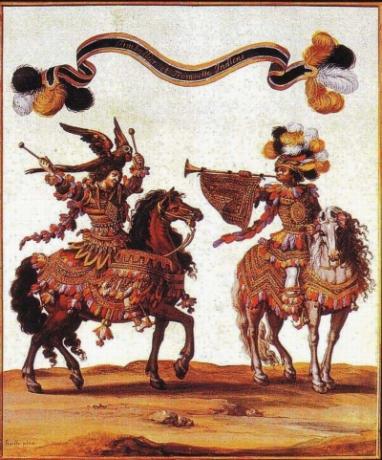 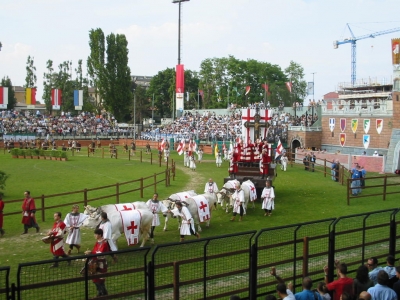 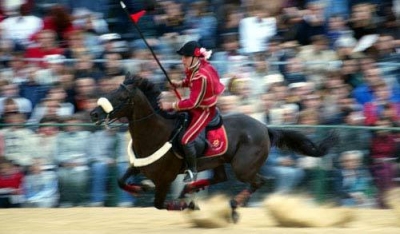 - Knight during the tournament2 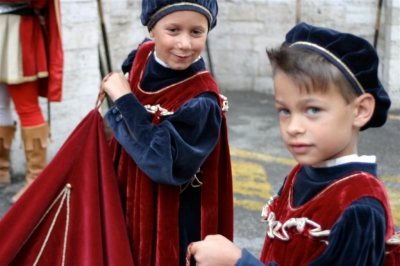 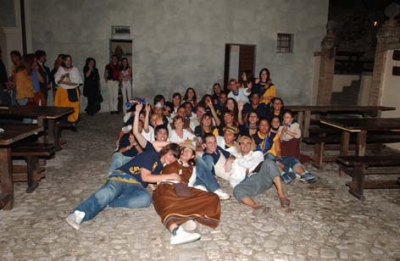 - Fun in the tabards 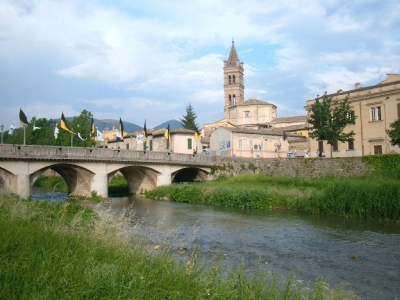 STORY
The “palio” consists of a cloth, very preciously refined, that was given as a price during contests since the Middle-Age.
It has an important artistic value since it is painted by contemporary artists and it’s different year after year.
The Palio must eternize the victory, the history of the town, the social way of life, religion and policy.
It is the memory of the “Giostra della Quintana” itself. The collection reminds as well the baroque decoration
and each artist personality. The common themes are: the parade, the horse run, the customs, countryside, people, fashions, adventures, flames. All of these elements are underlined by the victory emotion.
The eight shaped field has also a symbolic reference: eight is a cosmic number, means balance, Athens “wind tower”, the wheel rays, a mediation between the square and the circle shape, it is the creation key, the origin of origin. The origin of the Quintain
(or In Quintain) game dates back to Middle Age; the objective was to tilt at a rough wooden statue exhibited in Foligno’s Piazza Grande on 17 February, the St.Antony day.Formerly it was a wooden and movable “moor” statue, arranged in a special manner:
if it was not tilted precisely at the forehead or between the eyes, it would swing round and strike the back of the unsuccessful tilter with a wooden sabre. The recourse to that figure of “moor” is explained by an historical fact: in the first half of Ninth Century the Arabs penetrated in the peninsula through Sicily,being therefore assimilated with evil. In the town of Foligno, jousts and tournaments are documented since 1448, but the Quintain Joust of 1613 is certainly the strangest one. In the beginning of 1600 the Priors of the town, namely the six nobles which formerly performed the functions that are now assigned to the municipal council, started a discussion in order to define what was more suitable for a knight of honour: the faithfullness to the Prince or to enjoy the favours of a “very noble and gentle lady” The answer to that question was assigned to the weapons of Foligno’s noble youth; on 10 February 1613, at 20.00 p.m. in Piazza Grande, five young nobles jousted before the Magistracy and the Magnificent Centumviral Council Chancellor, Ettore Tesorieri from Andria, who was inventor, promoter and organizer of the event, as it appears from the Regulation’s reading. This documentation is reported for the first time by Monsignor Michele Faloci Pulignami in his homonymous publication printed in Foligno in 1906, on the occasion of the Ubaldi-Amori marriage, by the San Carlo artisan-typographer.The managers of the Mutual Aid Association were looking for initiatives suited to solemnize the 85th anniversary of foundation of the benefit association; they wanted also to comfort Foligno’s people still upset by the second world war. Therefore, with the suggestion of the Count Emilio de Pasquali from Andria, on 25 July 1946 they decided to bring back to life the knightly tournament called Quintain Joust,inspired by the knightly battle held in Foligno in 1613.Ten wards were designated to represent the town at the Campo de li Giochi. All the horsemen participating to the great challenge were from Foligno and lived in the wards which had chosen them for the defence of their colours.Since 1946 Foligno lives again that Seventeenth-Century’s knightly tournament atmosfphere.Nowadays 10 horsemen represent the following wards: Ammanniti, Badia, Cassero, Contrastanga, Croce Bianca, Giotti, La Mora, Morlupo, Pugilli, Spada. They joust togheter against a suspended ring with great tension and spectacularity.

HISTORICAL CORTEO
In the two next decades, the historical corteo of Saturday changed his “look”. According to the scholars of those years, the prevailing trend in the seventeenth-century culture was the French one. Therefore, in deference to that intuition, the figurants of Quintain wound like the characters of Dumas. With postiches and moustaches, long mantles and big hats embellished by more and more feathers. The Lady doesn’t wind anymore in carriages; she wears low-cut dresses and she rides a horse, escorted by her palfrenier in order to wind next to her Joust cavalier. During those years the wards give vent to creativity (which is not always in line line with history); they put into the field the flags wavers and they recruited bunches of drummers (in the first Seventies the Pugilli ward managed to draw up 18 drummers and the constant rivals of the Spada ward answered with 16 drummers). Then, in the beginning of the Eighties everything changes. The French influence is justly supplanted by the Spanish one. In fact, Spain was fairly the dominant power in Italy during the seventeenth century and - as somebody might have forgotten - Foligno was an integral part of the Papal State. Therefore the Historical Procession assumes a new image. The Ladies become less “cheerful”. They get off a horse and they wind on foot, dressed mostly with dark colours (mark of nobility), holding out their hands to their cavalier. Frilled collars reappear while moustaches and postiches disappear; the nobiliary and political element of the procession is enhanced.In order to underline the successful association between the Joust and Foligno, the Mayor and his Council wind along the central roads during the Historical Procession, escorted by the Municipal Standard and by the mounted Municipal Policemen. In the Nineties, the historical and artistic feature of the Procession was consolidated; in the attempt to ennoble and to increase the spectularity of the event, the most famous characters of the show-world started to wind in the procession. Of course women’s characters, beautiful women. Therefore, celebrities like Gerdard Depardieu and Melba Ruffo took part in the Saturday evening Procession with their baroque costumes. A wonderful sight, as observed by the organizers of the Twenty-first century Procession, which will reoccur with new and famous show characters.

THE TABARDS
The tabards were born thirty years ago, thanks to the idea of two “Quintanari”. They are the symbol of Quintana even during these past years, after the earthquake of 1997, that changed the shape of the town a little bit. The atmosphere of the 10 inns, full of 1600 life replicas, dances, musicians and plays, is very impressive both for the Quintanari and for the visitors.The first tabards came after a bet between the Rione Giotti and the Contrastanga one. The bet was about who would have organized a tabard more quickly between the two “Rioni”. The bet was won by the Giotti. But after this first try each “Rione” opened up its own tabard, making use of old cellars that are in the old side of the town. The first menu were based on beans, pork and wine but later on the menu was also revised according to strict researches on 1600 recipies, studied on the minimum detail. In the meanwhile a gastronomic “tenzone” is organized as well, shown by the national TV-net as well. The touristic boom is this way ensured. Among the visitors also very famous actors and actresses. The Rioni have made miracles and they go on making them; least but not last the hard job the 10 Rioni had to make to ensure the open up of their own tabards after the 1997 earthquake. But they made it! The rist 2000 edition will take place in a town that has mad miracles after the earthquake and the date will be always downthere the tabard!