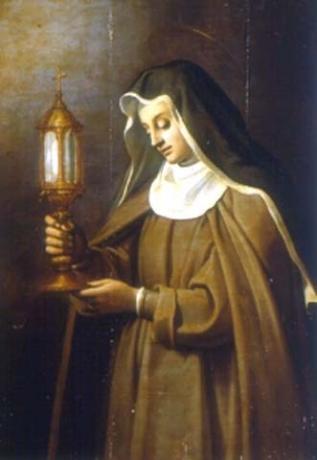 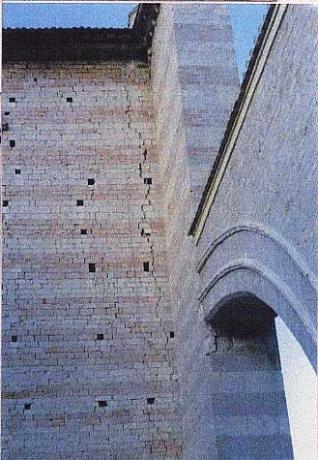 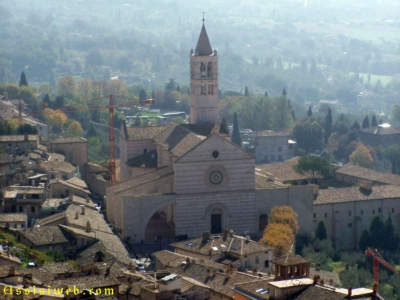 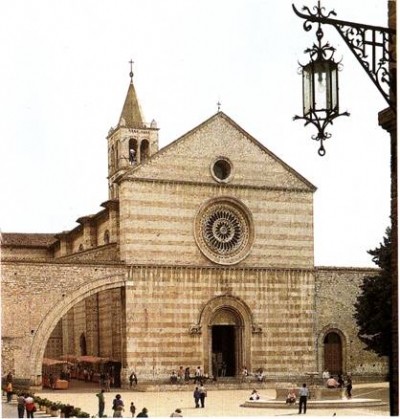 - Front view of the church 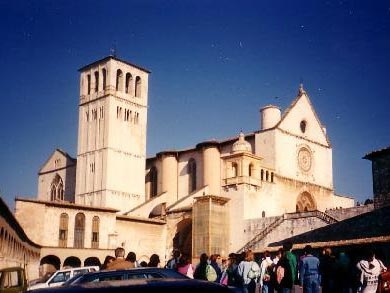 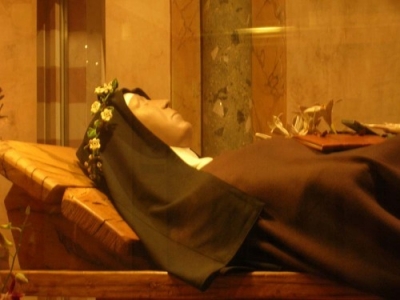 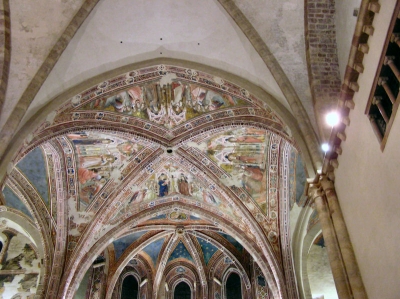 - Architectural detail of the church

Who in 1215 had, much against her will been made superior at San Damiano by St. Francis, continued to rule there as abbess until her death, in 1253, nearly forty years later. There is no good reason to believe that she ever once went beyond the boundaries of San Damiano during all that time. It need not, therefore, be wondered at if so comparatively few details of St. Clare's life in the cloister "hidden with Christ in God", have come down to us. We know that she became a living copy of the poverty, the humility, and the mortification of St. Francis; that she had a special devotion to the Holy Eucharist, and that in order to increase her love for Christ crucified she learned by heart the Office of the Passion composed by St. Francis, and that during the time that remained to her after her devotional exercises she engaged in manual labour. Needless to add, that under St. Clare's guidance the community of San Damiano became the sanctuary of every virtue, a very nursery of saints. Clare had the consolation not only of seeing her younger sister Beatrix, her mother Ortolana, and her faithful aunt Bianca follow Agnes into the order, but also of witnessing the foundation of monasteries of Clares far and wide throughout Europe. It would be difficult, moreover, to estimate how much the silent influence of the gentle abbess did towards guiding the women of medieval Italy to higher aims. In particular, Clare threw around poverty that irresistible charm which only women can communicate to religious or civic heroism, and she became a most efficacious coadjutrix of St. Francis in promoting that spirit of unworldliness which in the counsels of God, "was to bring about a restoration of discipline in the Church and of morals and civilization in the peoples of Western Europe". Not the least important part of Clare's work was the aid and encouragement she gave St. Francis. It was to her he turned when in doubt, and it was she who urged him to continue his mission to the people at a time when he thought his vocation lay rather in a life of contemplation. When in an attack of blindness and illness, St. Francis came for the last time to visit San Damiano, Clare erected a little wattle hut for him in an olive grove close to the monastery, and it was here that he composed his glorious "Canticle of the Sun". After St. Francis's death the procession which accompanied his remains from the Porziuncula to the town stopped on the way at San Damiano in order that Clare and her daughters might venerate the pierced hands and feet of him who had formed them to the love of Christ crucified--a pathetic scene which Giotto has commemorated in one of his loveliest frescoes. So far, however, as Clare was concerned, St. Francis was always living, and nothing is, perhaps, more striking in her after-life than her unswerving loyalty to the ideals of the Poverello, and the jealous care with which she clung to his rule and teaching.

When, in 1234, the army of Frederick II was devastating the valley of Spoleto, the soldiers, preparatory to an assault upon Assisi, scaled the walls of San Damiano by night, spreading terror among the community. Clare, calmly rising from her sick bed, and taking the ciborium from the little chapel adjoining her cell, proceeded to face the invaders at an open window against which they had already placed a ladder. It is related that, as she raised the Blessed Sacrament on high, the soldiers who were about to enter the monastery fell backward as if dazzled, and the others who were ready to follow them took flight. It is with reference to this incident that St. Clare is generally represented in art bearing a ciborium.

When, some time later, a larger force returned to storm Assisi, headed by the General Vitale di Aversa who had not been present at the first attack, Clare, gathering her daughters about her, knelt with them in earnest prayer that the town might be spared. Presently a furious storm arose, scattering the tents of the soldiers in every direction, and causing such a panic that they again took refuge in flight. The gratitude of the Assisians, who with one accord attributed their deliverance to Clare's intercession, increased their love for the "Seraphic Mother". Clare had long been enshrined in the hearts of the people, and their veneration became more apparent as, wasted by illness and austerities, she drew towards her end. Brave and cheerful to the last, in spite of her long and painful infirmities, Clare caused herself to be raised in bed and, thus reclining, says her contemporary biographer "she spun the finest thread for the purpose of having it woven into the most delicate material from which she afterwards made more than one hundred corporals, and, enclosing them in a silken burse, ordered them to be given to the churches in the plain and on the mountains of Assisi". When at length she felt the day of her death approaching, Clare, calling her sorrowing religious around her, reminded them of the many benefits they had received from God and exhorted them to persevere faithfully in the observance of evangelical poverty. Pope Innocent IV came from Perugia to visit the dying saint, who had already received the last sacraments from the hands of Cardinal Rainaldo. Her own sister, St. Agnes, had returned from Florence to console Clare in her last illness; Leo, Angelo, and Juniper, three of the early companions of St. Francis, were also present at the saint's death-bed, and at St. Clare's request read aloud the Passion of Our Lord according to St. John, even as they had done twenty-seven years before, when Francis lay dying at the Porziuncula. At length before dawn on 11 August, 1253, the holy foundress of the Poor Ladies passed peacefully away amid scenes which her contemporary biographer has recorded with touching simplicity. The pope, with his court, came to San Damiano for the saint's funeral, which partook rather of the nature of a triumphal procession.
The Clares desired to retain the body of their foundress among them at San Damiano, but the magistrates of Assisi interfered and took measures to secure for the town the venerated remains of her whose prayers, as they all believed, had on two occasions saved it from destruction. Clare's miracles too were talked of far and wide. It was not safe, the Assisians urged, to leave Clare's body in a lonely spot without the walls; it was only right, too, that Clare, "the chief rival of the Blessed Francis in the observance of Gospel perfection", should also have a church in Assisi built in her honour. Meanwhile, Clare's remains were placed in the chapel of San Giorgio, where St. Francis's preaching had first touched her young heart, and where his own body had likewise been interredBasilica of San Francesco. Two years later, 26 September, 1255, Clare was solemnly canonized by Alexander IV, and not long afterwards the building of the church of Santa Chiara, in honour of Assisi's second great saint, was begun under the direction of Filippo Campello, one of the foremost architects of the time. On 3 October, 1260, Clare's remains were transferred from the chapel of San Giorgio and buried deep down in the earth, under the high altar in the new church, far out of sight and reach. After having remained hidden for six centuries--like the remains of St. Francis--and after much search had been made, Clare's tomb was found in 1850, to the great joy of the Assisians. On 23 September in that year the coffin was unearthed and opened, the flesh and clothing of the saint had been reduced to dust, but the skeleton was in a perfect state of preservation. Finally, on the 29th of September, 1872, the saint's bones were transferred, with much pomp, by Archbishop Pecci, afterwards Leo XIII, to the shrine, in the crypt at Santa Chiara, erected to receive them, and where they may now be seen. The feast of St. Clare is celebrated throughout the Church on 12 August [later changed to 11 August -- Ed.]; the feast of her first translation is kept in the order on 3 October, and that of the finding of her body on 23 September.