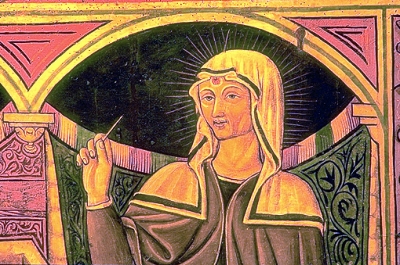 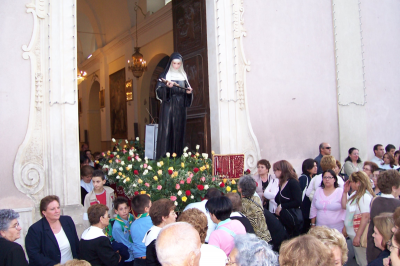 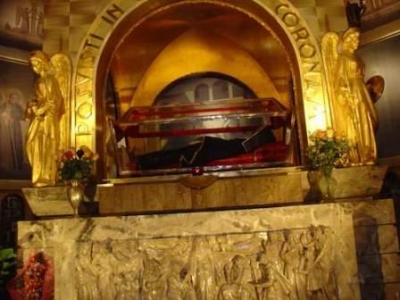 - Saint Rita inside the Cascia Church 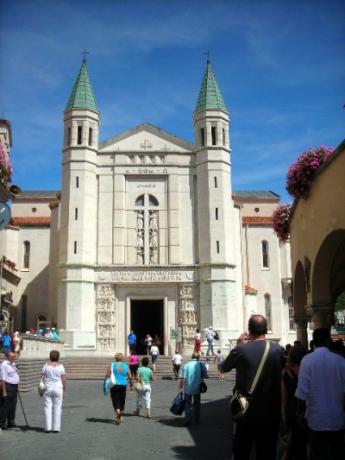 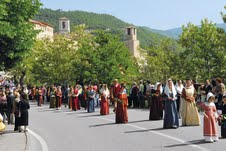 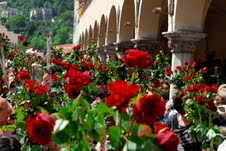 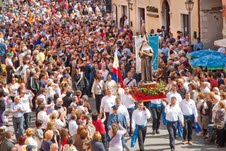 She was born at Roccaporena near Cascia, Umbria. The name is perhaps a shortening
of Margherita, the Italian version of the name "Margaret."
Rita was married at age 18 to Paolo Mancini. Her parents arranged her marriage, despite
the fact that Rita repeatedly begged them to allow her to enter a convent. Paolo was a rich,
quick-tempered, brutal, dissolute and uncontrolled man who made enemies in the region.
Rita endured his insults, abuses and infidelities for eighteen years, and watched as her
two sons grow up to be like their father.

Paolo was set upon and killed one night. He was violently stabbed many times.
He is said to have repented to the Church and Rita toward the end of his life, and Rita
forgave him for his transgressions against her.

While Rita continued to care for her sons, it became clear as they grew up they were intent
upon exacting revenge for the death of their father. Rita sought to persuade them otherwise,
telling them such a killing would be murder. She also prayed they would not carry out their plans.
James and Paul died of natural causes within the year, begging forgiveness of their mother.

With her husband and sons gone, Rita wanted to enter the monastery of Saint Mary Magdalene
at Cascia but was spurned for being a widow; virginity was a requirement for entry into that
particular convent. She persisted several times, though, and was finally given a condition to
enter: to reconcile her family with her husband's murderers. Rita worked hard to obtain this goal,
and after both clans were reconciled when she was 36 years old, Rita was allowed to enter the
monastery. It is also said that, while the sisters slept and despite locked doors, Rita was
miraculously went into the convent by her patron saints John the Baptist, Augustine of Hippo
and Nicholas of Tolentino. When she was found in the morning and the sisters learned how she had
gotten into the convent, they could not turn her away. While she was there, it is said that a thorn
detached itself from Christ's crown of thorns and set itself in her forehead - hence the representation
of a head wound in her appearance. She remained at the monastery, living by the Augustinian Rule,
until her death in 1457.

She was beatified by Urban VIII in 1627, to whose private secretary Fausto Cardinal Poli,
born less than ten miles from her birthplace, much of the impetus behind her cult is due;
she was canonized on May 24, 1900 by Pope Leo XIII. Her feast day is May 22.

The symbol most often associated with Rita is the rose. One of the stories surrounding Rita
and roses is that Rita would regularly bring food to the poor, which her husband prohibited
her from doing. One day, her husband confronted her as she was leaving to bring bread to the poor.
The bread was concealed in Rita's robes; when she uncovered the bread as her husband demanded,
the bread became roses and Rita was spared her husband's wrath. This story is also associated with
St. Elisabeth of Hungary. At the end of her life, when Rita was bedridden in the convent, a friend from
her home town visited her. The friend asked if there was anything Rita wanted from her old home.
Rita replied that she would like a rose from the garden. It was January, and although the friend did
not expect to find anything in the garden, she went to the house and found one rose blooming. She
brought the rose back to Rita at the convent. The rose is thought to represent God's love for Rita and
Rita's ability to intercede on behalf of lost causes or impossible cases. Rita is often depicted holding
roses or with roses nearby. On her feast day, churches and shrines of St. Rita provide roses to the
congregation that are blessed by priests during mass.

In the parish church of Laarne, near Ghent, there is a statue of Saint Rita in which several bees feature.
This seems to arise from the story that, on the day after her baptism, a swarm of white bees was seen
around the baby as she was asleep in her crib. They peacefully went in and out of her mouth, not injuring
her in any way. Her family seems to have been mystified rather than alarmed. Later, and in retrospect,
the bees were seen as representing her subsequent beatification by Pope Urban VIII.

A large sanctuary of Saint Rita was built in the early 20th century in Cascia; it and the house in
which she was born are among the most active pilgrimage sites of Umbria. Saint Rita, along with
Saint Jude is a patron saint of "Lost Causes". Recently, Rita has been referred to as the patron
saint of baseball. In the Walt Disney movie The Rookie, several references are made of St. Rita
as the patron saint of "Lost Causes" - the chances of the main character playing Major League Baseball
is considered a lost cause. This has sparked a small movement in baseball circles where Rita of Cascia
is considered the patron saint of the sport. Numerous religious medals have been printed with an image
of St. Rita on one side and a baseball hitter on the other.